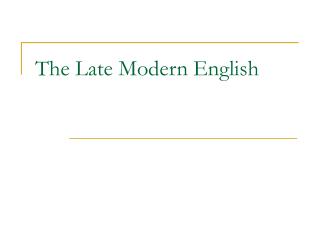 LATE MODERN ENGLISH - . 1700 - present. language is the mirror of the evolution of human civilisation. late modern

Late Modern - . 1945-1970. the late modern period was greatly effected by society around it. it was influenced by many

The Early Modern English - . early modern english is the stage of the english language used from about the end of the

THE LATE COLD WAR AND MODERN POLITICS - . ssush 25 – the student will describe changes in national politics since 1968.

Early Modern English - . the language of the renaissance. so, what now?. renaissance shakespeare queen elizabeth i king

291ENL The Making Of Modern English - . seminar 5 the extent of shakespeare’s influence on the phraseology of english.

Business English in the Modern Environment - . the real value of the english language. why english and why now?. english