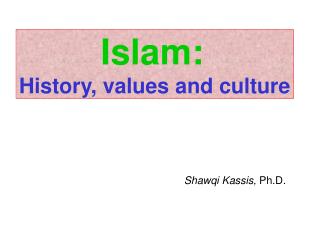 Islam: History, values and culture. Shawqi Kassis, Ph.D. We are all Muslims; some have the Gospels, others have the Quran. A Patriarch from Syria. 1. Which of the following is a true statement: A. All Arabs are Muslims B. All Muslims are Arabs Introducing Islam - In the name of god; the most merciful the most compassionate islam the arabic meaning of islam is

Chapter 7: Abbasid Decline and the Spread of Islam - . ap world history i. spread of islam: early history. spread of

ISLAM AND WOMEN - . www.islamthreat.com. the foundation of islam!. what does the koran say about women?. [4.11] allah

Judaism, Islam, &amp; Christianity - . a comparative look at the three monotheistic religions of the world. bell

The First Global Civilization: The Rise and Spread of Islam - . chapter 6 eqs: what is the history behind islam? what are