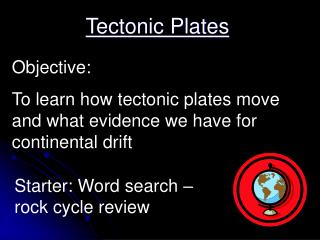 Objective: To learn how tectonic plates move and what evidence we have for continental drift. Tectonic Plates. Starter: Word search – rock cycle review. Tectonic plates. The crust is made of about twelve plates . These are like big rafts floating on the semi-molten mantle. Trusses 2 - •fabricated from various steel sections available, jointed together by welding or by bolting usually via

Chapter 5: Lithography - . introduction. the mechanism to print 2-d patterns to a thin film layer on the wafer surface.

California’s Mineral, Energy, and Soil Resources - . chapter 13a, section 1. geology of california. some of the

The Marine Realm - . morphology and processes. hypsography effect of eustatic and tectonic changes on land/sea

Digital Radiography - . or things they never tell you when the equipment is installed rev 11/2008. computed radiography.

Bulk Deformation Processes - . shape changes on the workpiece by plastic deformation under forces applied by various

Plate Tectonics - . big idea:. most geologic activity occurs at the boundaries between plates. i. drifting

Earth Shakes, Rattles, and Rolls - . plate tectonics volcanoes earthquakes. what is the relationship between the