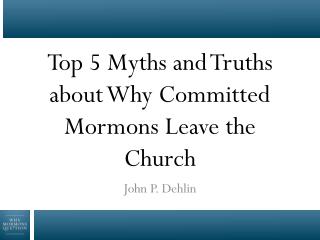 Top 5 Myths and Truths about Why Committed Mormons Leave the Church. John P. Dehlin. John P. Dehlin. A tiny bit about me…. Have spent the past 8 years speaking with thousands of disaffected Mormons Almost left the church myself. Recently returned Attend church weekly with my family

Bell Ringer - . welcome to class! lets get your brains thinking shall we?? what month did the mormons leave nauvoo? what

2 Truths &amp; a LIE - . approximately 2-3% of the water on earth is usable to humans the united states uses about

Basic Truths - . every soul is exceedingly important! genesis 1:27; matthew 16:25. the church is “the pillar and ground

2 Truths, 1 Lie - . directions for use: collect 2 truths and 1 lie from your students make them each a slide using the

Who was the person who founded the Mormon Church? - . return. who had a book written about him and was seen as this brave

Have nothing to do with godless myths and old wives’ tales; rather, train yourself to be godly. - “if you point these

7 (or more) Myths about Sales Tax and Nexus - . presented by: andrew kim avalara. it’s in the news!. marketplace

Dispelling HCV Myths - . february 2014. myth vs. fact. there are many myths about hepatitis c. this slide presentation

Leave Policy - . general rules there are three types of leave that are given in a calendar year: earned leave (el )