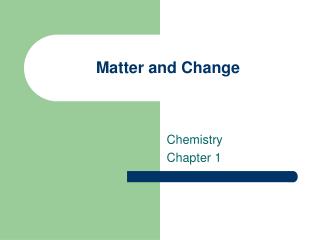 Matter and Change. Chemistry Chapter 1. Try to Answer the Following Questions. 1. A compound is formed by… A single element Two or more atoms Two or more nuclei Electrons and neutrons Which statement best describes atoms and molecules in a liquid? They vibrate rapidly

An observable or measurable change, but not a change in identity - . physical. chemical. matter. repel. correct way to

Chemistry: The Study of Change - . chapter 1. the discovery process. chemistry - the study of matter… matter - anything

Welcome Back!! - . congratulations on completing semester #1, now on to semester #2 thanks for being here on time.

Physical vs. Chemical Changes in Digestion - . what is matter?. anything and everything! has mass and takes up space!.

Matter &amp; Change - . chemistry -- a physical science. the natural sciences were once divided into 2 broad