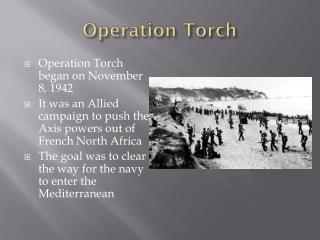 Operation Torch. Operation Torch began on N ovember 8, 1942 It was an Allied campaign to push the Axis powers out of French North Africa The goal was to clear the way for the navy to enter the Mediterranean. The assaulting force was split into three task forces Operation Torch - . by: jamie black and lauren cherry. objective. to inform the reader about operation torch and to

Operation torch - Beth herchick. north africa/rommel versus montgomery. operation torch. what the war was about the sides

Operation Torch - . operation torch began on n ovember 8, 1942 it was an allied campaign to push the axis powers out of

Battle of El-Alamein and Operation Torch - . 1942. thesis. the turning point of the allies’ expulsion of the axis in

TORCH - . a cherenkov based time of flight detector. maarten van dijk on behalf of the torch collaboration (cern,

TORCH 101: What is TORCH? - . sarah brown- torch chair. contents. torch objectives overview of torch how to get started

torch keto - O :- there is one get-healthy plan that is more successful than some other. it's the keto diet! today, we

Torch Awards - . 2013 - 2014. p rogram that frames and guides a members leadership and service to their chapter and

TORCH SAFETY - . soldering jewelry. it is amazing to be able to join metal using heat. the process we use in making