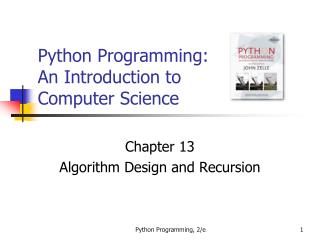 Python Programming: An Introduction to Computer Science. Chapter 13 Algorithm Design and Recursion. Objectives. To understand the basic techniques for analyzing the efficiency of algorithms. To know what searching is and understand the algorithms for linear and binary search. CS 122 – Jan. 9 - . the nature of computer science general solutions are better what is a program? oo programming broad