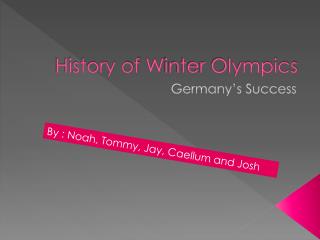 History of W inter Olympics . Germany’s Success. By : Noah, Tommy, Jay, Caellum and Josh. 1924, Germany was not invited to the first winter games because of World War I 1928, In their first Winter Olympics, they won one bronze medal in bobsledding. The W inter Olympics-History - . by finlay huffadine. winter sports. until 1920 some winter sports were held in the main

The History of the Olympics - . presented by mitchell elementary enrichment 2009 - 2010. enrichment students. enrichment

Olympics - Yes, there is a quiz at the end so pay close attention. olympics. beijing. opening ceremony the 2008 olympics