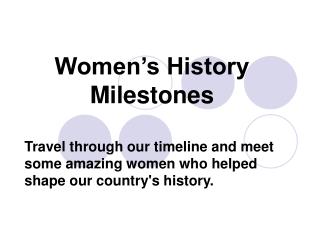 Women’s History Milestones. Travel through our timeline and meet some amazing women who helped shape our country's history. 1851 – Sojourner Truth.

Women position in India compared to other nations - . better or worse. titanium. better. women are given equal status

Women and Leadership - . the perception flip. academics ignored the issue until the 70s: many uninterested male

Contemporary Nursing Roles and Career Opportunities - . nursing . . . much the same, but bigger and better. the

Developmental Milestones-An overview - . illingworth 1987. development is continuous from conception to maturity and its

The 1950s-A Social History - . the economy and mass consumerism demographics movin’ on the ‘burbs consensus and