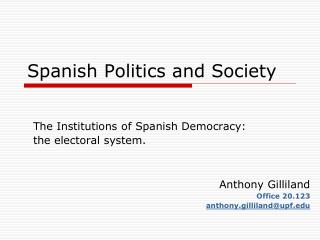 Spanish Politics and Society - . the institutions of spanish democracy: the judiciary within the spanish political

Society, Politics, and Education 1945-1950 - . a theoretical analysis of the post-wwii educational environment. i.

Irish History Politics and Society Databases - . some of the following databases are freely available on the web. most