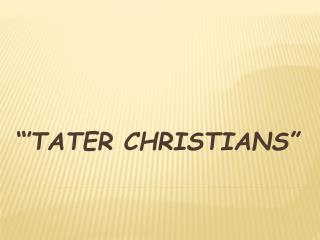 EASTER - . to an easter sunday christians observe the resurrection of jesus christ. the holiday of the holidays for the

The First Christians - . chapter 10 section 1. jesus . the jewish people had been hoping for a messiah to free them from

Christians - . created by: molly bailey &amp; ashley trantham . the introduction. it started around 30 ad many

The First Christians - . the first christians . main idea : jesus ’ life and a belief in his resurrection led to a new

Year 3 unit: How does the church building help Christians to worship? - Examples of unit titles from the re curriculum

Dawah to Christians - . session 5. last week homework. raise your hand if you have encounter a non- muslim did anybody

Chapter 5 - . persecution of christians. questions to be addressed in this chapter. why were christians persecuted in the

Lesson 2: How To Treat Others - . the person god expects. review. christians are to grow into perfection, maturity in