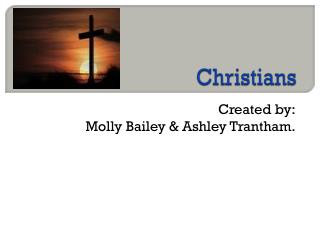 Christians . Created by: Molly Bailey & Ashley Trantham . The Introduction. It started around 30 AD Many Missionaries spread the teachings of Christianity. How it started. Started out in Palestine as a fellowship It moved to Greece and became a philosophy Christians - . by: gonzalo g uevara and sharae williams. christianity started out in palestine as a fellowship. how did

“Bizarre Christians” - . “bizarre christians”. how does the world see you? have you ever been accused of being

Authentic Christians - . luke 18:18-23. get personal!. christianity applies and impacts every area of your life. not

Windblown Christians - . opening worship (module 3). call to worship: let the redeemed of the lord praise (based on psalm

Just Christians - . is it possible to be just a christian?. what kind of christian are you? where do your loyalties lie?

Explain... (Christians) - . b. ody is a temple – a part of god lives within us. we should treat our bodies with the

WHEN CHRISTIANS GET IT WRONG Christians and Politics - . politics and religion. when you discuss politics with others,

Christians &amp; Demons - . part i the spiritual war within. “for our struggle is not against flesh and blood, but

The First Christians - . the first christians . main idea : jesus ’ life and a belief in his resurrection led to a new