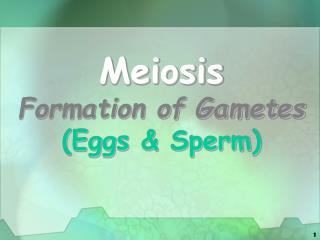 Meiosis Formation of Gametes (Eggs & Sperm). Important Terminology. Diploid (2N): “two sets”; a cell that has 1 set of chromosomes from its female parent and 1 set from its male parent (=2 copies of each chromosome) Diploid Life Cycle - Most animals have a diploid life cycle. most of the life cycle is spent in the diploid state

Gametogenesis - . gametes develop in the gonads (sex cells). their are 2 types of gametogenesis. production of sperm in

Meiosis- - . process that produces haploid gametes from diploid cells reduces the number of chromosomes to half. gametes.

Meiosis and Chromosome Assortment - . chromosomes in human cells. somatic cells include all cells in the human body

MEIOSIS - . sperm &amp; eggs &amp; variation..oh my!. sexual reproduction requires cells made by meiosis. what if

Meiosis - . sexual division of cells. gamete vs. zygote. what is a gamete? egg &amp; sperm . what is a zygote? when

Recognize the cells in the various phases of meiosis and describe each: - . describe what mitosis is used for in living

MEIOSIS - . every living cell goes through the process of mitosis……… except sex cells. there is always one

Prenatal Development - . we have the gametes, eggs and sperm, produced by meiosis and each with half of the required