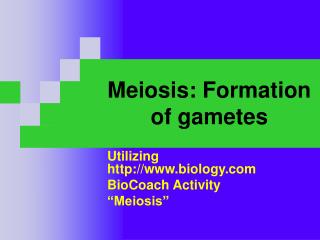 Meiosis: Formation of gametes. Utilizing http://www.biology.com BioCoach Activity “Meiosis”. Meiosis occurs only in sexually reproducing organisms. In animals, where the somatic (body) cells are diploid, the products of meiosis are the gametes. Section 11–4 - . meiosis . this section explains how gametes form in the process of meiosis. it also explains how

MEIOSIS - . reduction division. meiosis – points to remember. occurs only in the gametes produces 4 haploid cells which

Meiosis 1 - . by: shirelle ruffin biology honors january 5, 2012. meiosis is a process of nuclear division that reduces

MEIOSIS - . every living cell goes through the process of mitosis……… except sex cells. there is always one

MEIOSIS - . meiosis. the form of cell division by which gametes , with half the number of chromosomes, are produced.

Lecture #5 Meiosis and Gamete Formation - . unit: cellular reproduction. the birds &amp; the bees. humans and most