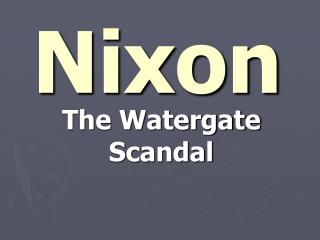 Nixon - . i. the man a. very intelligent, paranoid, private, hot tempered b. never accepted by the “elite crowd”. ii.

Nixon - . nixon in person. although he had a reserved and remote personality, many americans respected nixon for his

Nixon - . “i am not a crook”. domestic policy. new federalism wants to give more power back to the states he

STEVE NIXON The Nixon Consultancy - . . aims. looking at past experiencetowards an understanding of emotional

Nixon Superstition - Superstition is no joke people! if you see a black cat about to cross your path i know you take the

Nixon Agonistes - . focus question:. when, if ever, should a president be impeached?. richard m. nixon. hard-nosed