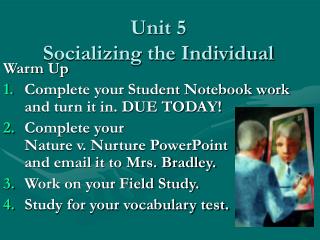 Nature and Nurture in Psychology - . module 3, chapter 1. important questions to ask. what makes you, you? how do our

Nature and Nurture - . biopsychology. goals:. what is the nature-nurture issue? what are key issues in behavior genetics?

Complete today’s warm up - . turn in short stories to the paper tray on the back table “most dangerous game”

WARM UP Copy this chart into your notebook: - . one. two.

Nature and Nurture in Psychology - . what are we made of?. nature. nurture. all the environmental factors that affect us

Complete Warm up on worksheet! - . war in the pacific!. world war ii in europe. japan immediately invaded the philippines

Friday, September 6th 2013 DAY a Warm-ups (COMPLETE IN YOUR SPIRAL NOTEBOOK): - . create and use a flowchart to help find

Setting Up Your Notebook - . properly setting up your notebook can help you be successful the rest of the year. the first

Warm Up Write the correct answer in your notebook - . which step would be done first in a scientific investigation? a.

Setting Up Your Interactive Student Notebook (ISN) - . your key to success in geography/social studies. have you ever

Setting Up Your Interactive Student Notebook (ISN) - . your key to success in united states history. have you ever heard