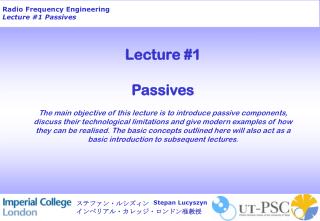 Lecture #1 Passives The main objective of this lecture is to introduce passive components, discuss their technological limitations and give modern examples of how they can be realised. The basic concepts outlined here will also act as a basic introduction to subsequent lectures. OVERVIEW Lecture #11 - . invertebrate visual pigments 3 /5/13. homework comments. if you send it in word, i have put comments on