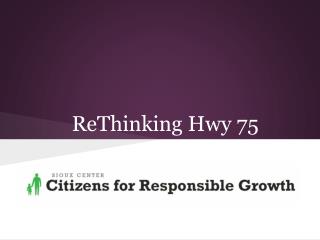 ReThinking Hwy 75. Our downtown. The city explains the project. But is it just as safe?. According to the 2008 MN DOT Traffic Safety Fundamentals Handbook: A conversion from 3 to 5 lanes increases crashes by 18-20%. Comparing 3-lane and 5-lane. Rethinking - Serving the customer". moving from customer service" to . leadership is not so much about

HWY 314 Youth Group - . “for i know the plans i have for you, declares the lord, plans to prosper you and not to harm