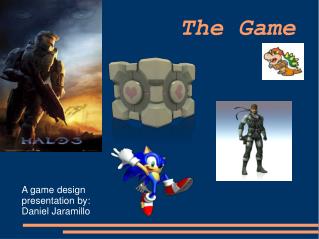 The Game. A game design presentation by: Daniel Jaramillo. The Game. What is a Game? Types of Games Video Games Genres Simple Games Creating a Game Idea Rules How do you win, if you actually do win? Controls How many can play? What do you want to do with your game? The Game Inside the Game - . karl lieberherr based on master thesis of anna hoepli at eth zurich in 2007 (communicated

The Game Inside the Game - . karl lieberherr based on master thesis of anna hoepli at eth zurich in 2007 (communicated by

The Game - . “great expectations is the most perfectly constructed and perfectly written of all dicken’s works” ~

The Game - . by: joselipana *. instructions. read the followings sentences that will be given. guess the vocabulary word

The Game - . by: eddie ackert. a game, a game, a video game for two weeks that’s all on my mind its music and sounds

The Game - . how’s your game?. rules of the game. enter your answer after the question and choices are read. let’s

The Information Literacy Game library.uncg/game/ - The information literacy game http://library.uncg.edu/game/. what is

The Westing Game - . by us. the mystery/problem/crime. sam westing was murdered. the 16 heirs have to find the murder of

The Game Boy - . by: william boddington date: october hour: 1st. about the game

The Urban Game - . draw a river across your paper connecting east to west. the river should be about an inch wide. draw

Plagiarism: The Game - . what do you know about plagiarism? how can you avoid it? let’s find out! (based on a

The Snake Game - . lesson 14. how the snake game draws the snake!. the snake is drawn one pixel at a time. uses the pset