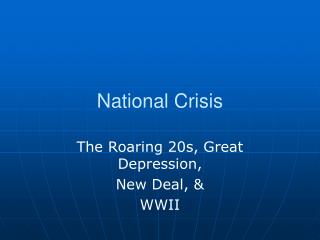 Finance and the Crisis Umberto Cherubini University of Bologna - . outline. how the crisis started securitization

The Cuban Missile Crisis and Beyond - . fidel castro took control of cuba in 1959 and declared himself a communist. the

The current political, humanitarian and security crisis in Mali - Creates an unacceptable situation for the country, and