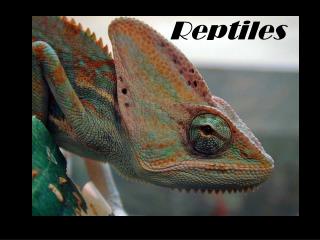 Reptiles. limited competition for the insects and plants that could be used as food on the land. an increase in competition for food and space among all the life-forms in aquatic environments . Reptiles - . diversity. diversity found on every continent but antarctica mainly found in tropics and subtropics produce

Reptiles - . reptiles are cold-blooded. their bodies need to be warmed up from outside. their skins are covered with

Reptiles - . nolan byer soyer mattson parker robertson matthew romack calvin schneider. i am a komodo dragon. i am a

REPTILES - . what is a reptile?. snakes, turtles, alligators, and lizards are considered reptiles. reptiles have scaly

Reptiles - . some of these creatures are deadly but some aren’t. what is a reptile?. reptiles have been alive for very

Reptiles - . ch. 11.4. adaptations for life on land. reptiles lay their eggs on land rather than in water. a reptile is

Reptiles - . biology 112. the evolution of reptiles from amphibians. as earth became drier, amphibians started to die out

Reptiles - . limited competition for the insects and plants that could be used as food on the land. an increase in