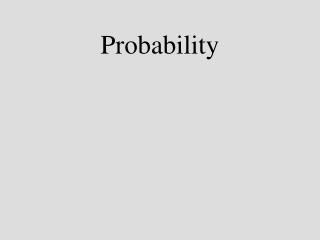 Probability. Questions. what is a good general size for artifact samples? what proportion of populations of interest should we be attempting to sample? how do we evaluate the absence of an artifact type in our collections?. “frequentist” approach. PROBABILITY - . conditional probability. random variable. a variable defined on a sample space. fx: the value of a card.

Probability - . the chance of an event occurring. symbol: p(x). probability experiment. a chance process that leads to

Probability - . an example to consider. say i take a quarter and one of the two dice (what is known as one die) that i

Probability - . probability theory is the science of uncertainty. definitions:. experiment: an activity that its results

Probability - . how likely is an event to occur? what are the chances of that happening??!!. lesson objectives:. to

Probability - . or just my luck?. are you lucky in raffles ?. if, in every raffle you entered there were 100 tickets