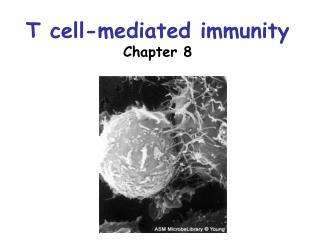 T cell-mediated immunity Chapter 8. Objectives. Describe the protein-protein interactions necessary for naïve T cell activation to occur Illustrate or describe the changes that occur in a dendritic cell upon activation

Cell-mediated immunity - . live example: the viral infection. intra- vs extra-cellular . immunity to microbes will be

Principles of Immunology T Cell-Mediated Immunity 3/28/06 - . “each of us needs to be the change we wish to see in the

Chapter 14- Cell-mediated responses - . where we’re going with this chapter: understanding “effector” cells- and