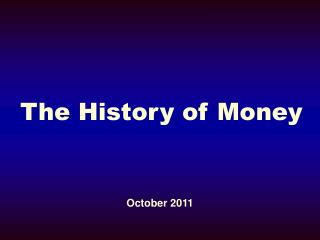 The History of Money The History of Money. October 2011. Why do we have money?. Convenience It is often easier to use money than barter / trade Would you prefer to receive fish or eggs instead of cash for the services you provide to your employer ?. What is money?. Features of Money. A medium of exchange

The History of Money

The Money Supply and the Federal Reserve System - . an overview of money. money is anything that is generally accepted as

“Old Money” vs. “New Money” - . by: miss cara cleek. in regards to wealth, two classifications have been

Lecture 4 Money and Inflation - . money. what is money? money is any object that is generally accepted as payment for

Introduction to Money - . fundamentals of finance – lecture 1. meaning of money. what is it? money (or the “money

Money and Price Level - . paper money. does paper money have any intrinsic value? what is money then? why is it

Money, Banking, and the Federal Reserve - . money . anything society accepts in exchange for goods and services fiat

Chapter 1: Money &amp; Inflation - . what is money? money is anything that is readily accepted in payment of a debt.