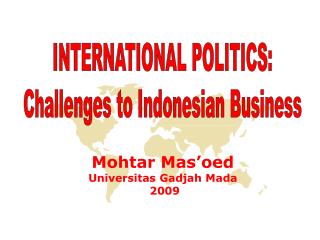 INTERNATIONAL POLITICS: Challenges to Indonesian Business. Mohtar Mas’oed Universitas Gadjah Mada 2009. GLOBAL BUSINESS ENVIRONMENT. Why should we bother?. UNCERTAINTY. The biggest problem in the decision-making. Meanwhile. Economics does not help. The qualifying concept of

12 International Politics: Apocalypse Now and Then - . back to anarchy. globally, there has never been a formal,

Marxist perspectives on international politics - . social organization is driven by economics not security technology is