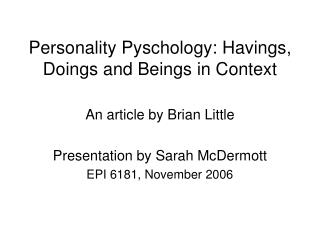 Let's Play Fonts! 2 [Typography Illustrated] - Fonts can tell more about a person that you know! they represent your

Social &amp; Personality Development in Infancy - . chapter 6 development across the life span. forming the roots of

Spirituality: Faith and Healthcare - Presented by chaplain dana bratton “we are not human beings having a spiritual

Which adjectives might your friends use to describe your personality? - . happy brave funny pleasing

Chapter 5 Personality and Consumer Behavior - . what is personality. the inner psychological characteristics that both

Theories of Personality Seventh Edition - . by jess feist and gregory j. feist. © 2009 by the mcgraw-hill companies,

Chapter 14 Personality - . test review. according to freud, the part of the psyche that stops a person from stealing is