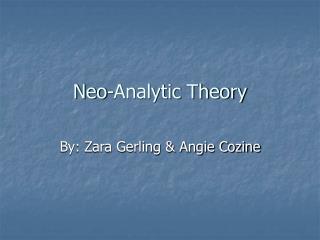 Neo-Analytic Theory. By: Zara Gerling & Angie Cozine. Overall Definition. Neo-Analytic Approach – the approach to personality psychology that is concerned with the individual’s sense of self (ego) as the core of personality

Neo-realists – neo-liberals - . the debate to date. neo-realism neo-liberalist. structure of the international system

Analytic Trigonometry - . chapter 6. texpoint fonts used in emf. read the texpoint manual before you delete this box.: a

Analytic Geometry - . introduction to conics - lines and circles. what you should learn. find the inclination of a line.

Analytic Cubism - . -art period that went from 1909 through 1912 -developed by picasso and braque -made of geometric