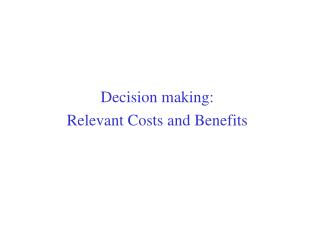 Decision making: Relevant Costs and Benefits. We need a particular component for our manufacturing process. Do you think we should make or buy this particular item?. Make versus Buy. Let’s take a look at a decision faced by many businesses. W. Make or Buy. Relevant Costs for Decision Making - Cost concepts for decision making. a relevant cost is a cost that differs between

Relevant costs and revenues - . how to identify relevant information in an “sea” of information. what product costs

Relevant Costs for Decision Making - . topic nine. cost concepts for decision making. a relevant cost is a cost that

Decision Making and Relevant Information - . chapter 11. information and the decision process. a decision model is a

Chapter 13 Decision-Making and Relevant Information - . differential costs and revenues bill is currently employed as a