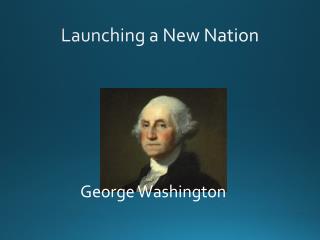 Launching a New Nation. George Washington. “About ten o’ clock I bade farewell to Mount Vernon, to private life, and to domestic felicity, and with a mind oppressed with more anxious and painful sensations than I have words to express, set out for New York.” -George Washington, April 16, 1789.

Launching a New Republic, 1789 – 1800 - . washington’s presidency. the leaders of the new nation face the challenges

Launching a New Republic 1789-1800 - . washington’s presidency hamilton and the banks. goals. 1. to explain how the

Launching a New Nation - &quot;i walk on untrodden ground. there is scarcely any part of my conduct which may not

NATION - . people who share a sense of belonging and want to control their own destiny. may not have official borders or

Module #5: Launching a Successful Practice - . clarify pros and cons of seeking outside employment. identify an