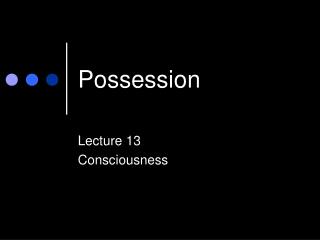 Possession. Lecture 13 Consciousness. overview. The last few weeks we have examined agency – who is in control of our actions? This week’s lecture focuses on experiences when we are taken over by others Spirit possession Mediums and channelling Dissociative Identity Disorder. Possession - . lecture 13 consciousness. overview. the last few weeks we have examined agency – who is in control of

Possession Progression - Set up: area to suit age and ability of group of players 4 teams of 3 and 2 goalkeepers 3 v 1 in

Precious Possession - . matt 16:26 “for what is a man profited, if he shall gain the whole world, and lose his own

Possession avec “de” - . it ’s forbidden to use ‘s en fran çais. how do you possess it?. en fran çais, there

Possession using DE - . possession means “ownership”. in english, we show possession ( who owns something ) by adding