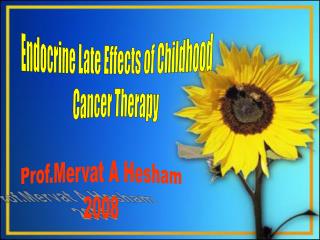 Endocrine Late Effects of Childhood Cancer Therapy. Prof.Mervat A Hesham 2008. Late-Effects. It is estimated that 2/3 of childhood cancer survivors will experience a late-effect from treatment. The endocrine system is made up of - . hormones. glands. gonads. prostaglandins. the nervous system is to a telephone as

Chew On this - . a nurse’s guide to teaching the oncologist averse what to eat and why. bianca moses fall 2012. cancer

Group Therapy - . helping each other heal and grow. this lecture:. history of group therapy what is group therapy? why do

Group Five - Cancer in Adults - . starting w/ andrew. cancer! . what is it about cancer! fear we no longer have control!