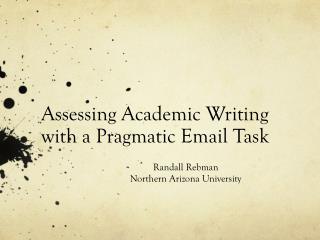 Assessing Writing - . questions to consider. a - why do we carry out assessments? b – who are the results of our

Assessing Writing? - . wrad. what we need…might just be. a few good rubrics. after all, rubrics should help us define

Tips for dealing with a writing task - . 1. find ways to assess your performance: 1) compare it with the model (analyze

Writing Task: - . today is christmas eve at the north pole. every one is busy getting ready for the big night! pretend

Getting Started with Academic Writing - . writing critically with confidence. getting critical. get familiar with your

EMAIL WRITING - . ready, set, guess the problem!. before writing the email. make a plan!. think about the purpose of the

Email Coursework Task - . by miles fajembola 10e. pass criteria. send an email. here is the email i sent to wacky