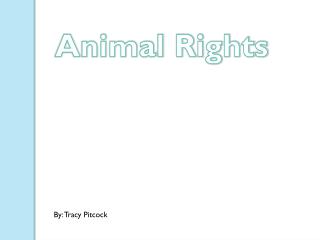 Animal Rights. By: Tracy Pitcock. Thesis Statement. Two reasons why animal rights should be enforced more: animal testing and animal entertainment. . Animal Testing. Would it be morally more permissible if you could hire someone to do the killing for you?. Cont. JOLTS - . with thiagi and tracy and raja. say it in sequence. say the names of the days of the week in sequence. begin

POLITICAL IDEOLOGIES - . t he term ideology was first used in 1796 by destutt de tracy. he argued that “idea-logy”

What family do I belong to? - . woodwinds. brass. instrument family identification powerpoint by tracy king. strings.

Taking Care of Yourself! - . presented by: tracy lester wellness council of arizona. taking care of yourself. improve

PSY 312: Brain and Behavior - . dr. mark prendergast office: b449 bbsrb (on the corner of virginia and limestone st.)