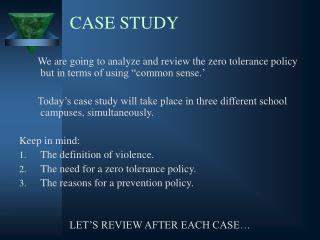 CASE STUDY. We are going to analyze and review the zero tolerance policy but in terms of using “common sense.’ Today’s case study will take place in three different school campuses, simultaneously. Keep in mind: The definition of violence. The need for a zero tolerance policy.