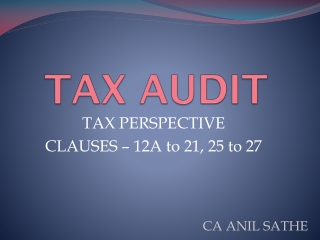 TAX AUDIT. TAX PERSPECTIVE CLAUSES – 12A to 21, 25 to 27. CA ANIL SATHE. Tax audit is a combination of. An audit requiring expression of an opinion on whether accounts show a true & fair view. Certification that the particulars in Form 3CD are true & correct. Tax Audit - Corpbiz deals in tax audit. the main reason for a tax audit is to remove a report as per the predetermine of

Tax Audit company - Hurry up! set up an appointment with our tax audit company. now you can talk about your specific

IRS Tax Audit - Audits offer the highest level of assurance to third parties, and include in-depth examination and

Audit vs. Tax - . which is right for you?. what is audit?. audit is the examination of an entity’s financial statements

Toronto Tax Audit - Work with the very best accountant in toronto for your firm at https://rcfinancialgroup.com find us

Audit in Service Tax - . “auditing is a systematic and independent examination of data, statements, records, operations

IRS Tax Audit NJ - Around this time of year, you could get an abrupt reminder in the form of an irs penalty. the irs will

Practical Issues in Tax Audit - . c.a. divakar vijayasarathy. provisions of the act. audit u/s 44ab is required in the