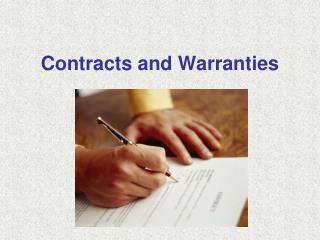 Sales Contracts and Warranties - . now we focus on the ucc, in other words commercial law how the ucc governs sales

CONDITIONS AND WARRANTIES - Conditions and warranties. stipulation a stipulation in a contract of sale with

CONDITIONS AND WARRANTIES - . stipulation a stipulation in a contract of sale with reference to goods which are the

Warranties - . warranty. promise or guarantee by the seller about the quality or performance of goods for sale. breached.

Warranties - . how excited are we!?!. warranties. what is a warranty? what is the last thing you bought with a warranty?

Warranties - . review questions. 1. the person who becomes secondarily liable for another’s debt or performance is

Express and Implied Warranties - . what basic obligations do you presume the seller should take?. in a sale the seller

WARRANTIES AND PRODUCTS LIABILITY - . warranties under the ucc. an assurance from seller that goods meet certain

14.1 Express and Implied Warranties - . after finishing this section, you will know how to: describe the three ways an