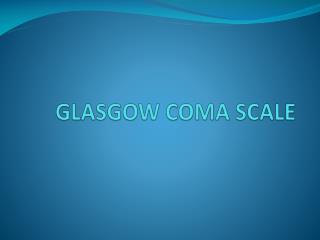 Glasgow Coma Scale - . glasgow coma scale or gcs is a neurological scale that aims to give a reliable, objective way of

COMA - . consciousness : state of patient’s awareness of self and environment &amp; his responsiveness to

Coma - . by shireen gupta. definition. consciousness state of awareness of self and the environment coma sleep-like state

COMA - . coma= state of deep sleep coma is a profound state of unconsciousness. a person in a coma cannot be awakened

Background - Waiting for the patient to “sober up”: effect of alcohol intoxication on glasgow coma scale score of