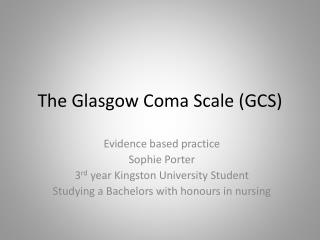 Neurophysiological assessment of coma - . definitions. consciousness is the state of awareness of self and the

Shannon AirMed1 - When to call airmed1. helicopter use should be considered in the following situations trauma

Approach to Injuries of the Head &amp; Spine - . stephan brenner, md, mph. teaching objectives. by the end of this

Background - Waiting for the patient to “sober up”: effect of alcohol intoxication on glasgow coma scale score of

Coma - . by shireen gupta. definition. consciousness state of awareness of self and the environment coma sleep-like state