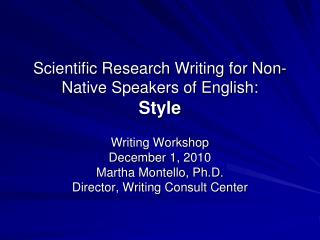 Scientific Research Writing for Non-Native Speakers of English: Style. Writing Workshop December 1, 2010 Martha Montello, Ph.D. Director, Writing Consult Center. Have something to say, and say it as clearly as you can. That is the only secret of style. Matthew Arnold. Write clearly. How to Write up your Results Section of your Research Paper - . analyze the data. statistical analysis find key results.

TBLT in a Dual Language Program - Goals of dlp. dual language programs are based on an educational model that integrates

Writing a Research Proposal - . by dr. pearl wattanakul department of teaching english to speakers of other languages

Ch1 What Is Scientific Writing ? - . state your facts as simply as possible, even boldly. no one wants flowers of

Review - . a factorial experiment compares native and non-native english speakers on their compehension of either spoken

Non-native writing errors: some which may persist - . -the challenges of english -common errors and their roots

German Features - . reference. around the world , german is spoken by approximately 105 million native speakers and also