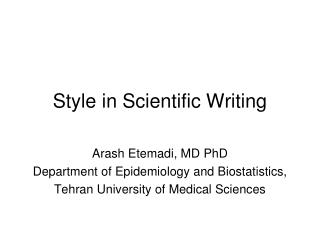 Style in Scientific Writing. Arash Etemadi, MD PhD Department of Epidemiology and Biostatistics, Tehran University of Medical Sciences. What is style?. • Communication is an attempt to sell someone else our ideas • Style in writing is all about choice of how this is done