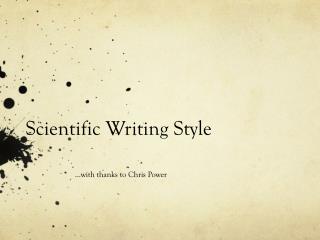 Scientific Writing Style. …with thanks to Chris Power. These slides. Please note that these are the slides that I used in my lecture on 15 November 2013, but supplemented with some additional examples. Purpose. Previous lecture Why we write Today How to write ‘scientifically’. Scientific Writing - . mest 201 pr.dr.ramez bedwani. outcomes:. by the end of this lecture, the student will be able to

Scientific Writing - . how to complement results with tables ? part-5. what does complement mean?. tables that,tell what