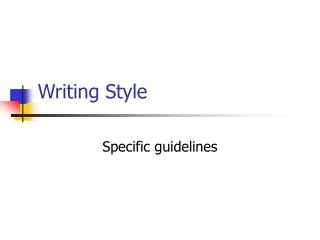 Writing with Style - . chapter 3: openers. the challenge:. you have 3-4 sentences maximum to gain the reader’s interest

Writing With Style - . a conversation on the art of writing by professor john trimble. getting launched…. think of a

MLA Writing Style - . a crash course in the kind and loving world of the modern language association’s style and

Writing With Style - . quality descriptive writing. the 6 traits of writing. a great piece of writing has all of these

Scientific Writing Style - . …with thanks to chris power. these slides. please note that these are the slides that i

Style &amp; Writing - . english 12. literature as art?. we consider paintings and music art because their

apa style writing - . . what are the goals of academic writing in psychology?. advance knowledge in the fieldreplicate,