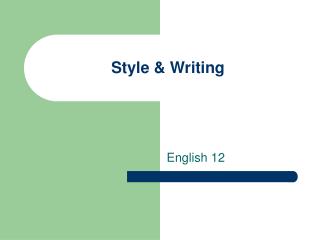 Style & Writing. English 12. Literature as Art?. We consider paintings and music art because their interpretation is left open to the viewer, and its effects are different for each. Does each person interpret poetry in the same way? No. Texts can be art too!. Style in Writing. Accelerando (Accel.) - . gradually speed up. the practice if improvising alternating 4-measure solos between an