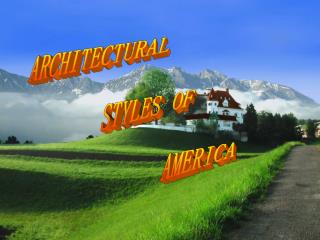 BUILDING TECHNOLOGY AND ARCHITECTURAL DESIGN - . agenda aim of the course theory - tectonic as a term - background in

An Overview of Nanotechnology with a QCA slant… - But, really its all about system-level, architectural and circuit

Architectural Design - . objectives. to introduce architectural design and to discuss its importance to explain the