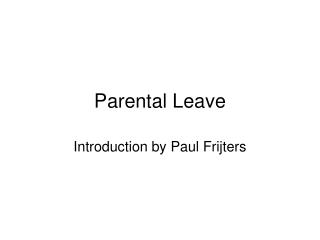 Parental Leave Entitlements as at September 2014 - . as at june 2014. what is it?. form part of the national employment

Comparison of Parental Leave Policies between Japan and Australia - . introduction. includes all the merits and benefits

Use of Parental leave policies in the Russian Federation - 11 th lpr network seminar, tallinn, september 18, 2014. use of

MATERNITY AND PARENTAL LEAVE POLICIES: A COMPARATIVE VIEW (Before the FMLA) - . medical/leave benefits: us comparison