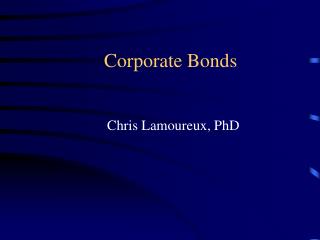 Corporate Bonds. Chris Lamoureux, PhD. Credit Risk. Unlike the Federal Government, corporate borrowers may default on debt, meaning that the nominal cash flows on a corporate bond cannot be known in advance with certainty. Corporate bonds - . usually more risky than government bonds the yield is determined by the credit rating of the

Pricing Corporate Bonds - . should corporate bonds be priced off the bond curve or the swap curve? david rajak, rand

Chapter 47: Corporate Stocks and Bonds - . ownership through stocks. the ownership of a corporation is evidenced by a