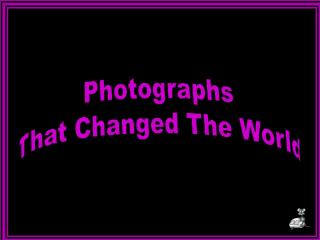 Photographs That Changed The World. 1957. The first day of Dorothy Counts at the Harry Harding High School in the United States. Counts was one of the first black students admitted in the school, and she was no longer able to stand the harassments after 4 days. 1960. Unit 3 Constitutional Change - . essential question. how has the constitution been changed to further the ideals

The Origin and Evolution of Microbial Life: Prokaryotes and Protists - . chapter 16. 0. how ancient bacteria changed the

Human Understanding of both Earth and Space has Changed Over Time - . unit e: topic one. 1.1 early views about the

Open Data Kit and Other Technologies Use of Java in the Third World - . steven m. lewis phd smlewis@lordjoe.com.

Preparing Students for the Challenges of Tomorrow: We Can’t Do It Without You! - . what we ’ ll cover…. the world