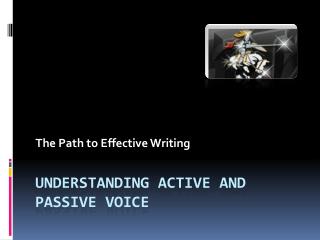 The Path to Effective Writing. Understanding Active and Passive Voice. Verbs and Voice. Voice is the form a verb takes to indicate whether the subject of the verb performs or receives the action. There are two types of voice: active voice and passive voice. Active Voice. APPROACH TO MONOARTHRITIS - . dr cb nel. “ inflammation of a single joint” acute chronic. where is the inflammation?.

Chapter3: Basins due to lithospheric stretching - This presentation contains illustrations from allen and allen (2005).

The Policy Debate: Active or Passive - . summary of activist position. active policy associates a high cost with the

Active and Passive Voice - . voice indicates if the subject acts or is being acted upon. active voice : kristen wrote the