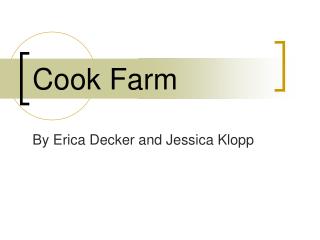 Cook Farm. By Erica Decker and Jessica Klopp. Just Outside of Huevelton. The Farm House. The Cook Farm House was built in the 1800â€™s. The Barn. The barn is where the cows and sheep are kept, along with the grains that are produced to feed them. cook - To enjoy and to practice your kitchen cook simulator

Cook - . he cooked alone, and he made the best meals. the cook was multitasked, he could cook a meal and bake a dessert

CAN COOK – DOES COOK - . the use of a ward based kitchen to improve patients’ appetites . the clinical nutrition

CAN COOK – DOES COOK - . the use of a ward based kitchen to improve patients’ appetites. the clinical nutrition unit

Cook - . by:hayleelangel. why i chose this job. love to cook wanted to know more interest me. duties. check freshness of

Ellee cook - . soccer. i am the best at soccer. art. my favorite subject in school is art. i like to read books that are

Cook it! - . manu. today in cook it!. what are your priorities if you enjoy this dish: stuff yourself easy to cook

Bethany Cook - . about gk-12. gk-12 is a program funded by the national science foundation our goal is to have fellows

Cook Needed - Are you g ood with cooking? can you drive a chuck wagon? and looking for adventure on the trail? wanting a