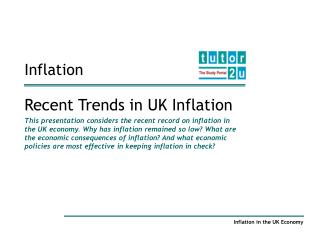 Inflation. This presentation considers the recent record on inflation in the UK economy. Why has inflation remained so low? What are the economic consequences of inflation? And what economic policies are most effective in keeping inflation in check?. Recent Trends in UK Inflation.